You are here: Home / Communication / Accomplished Leaders and Impostor Syndrome: Is Your Self Doubt on Steroids?

Everything you need to understand and overcome Impostor Syndrome

Ever felt like your success is fraudulent and that one day someone will figure you out? You are not alone! Impostor Syndrome is debilitating but defeat-able.

Although you are an accomplished leader do you feel as though you are just not good enough; your self-confidence and competence measures zero on the rector scale? Do you live in dread that you will be exposed at any moment? Some of the most capable and accomplished leaders may be suffering from a crippling phenomenon—an exaggeration that distorts their thinking making them believe they are truly incompetent, which affects their self-confidence. This distorted thinking convinces leaders they fake their way through their accomplishments.

Impostor Syndrome (IP), was first described in a 1978 study by psychologists Pauline Rose Clance and Suzanne Imes. The study focused on high-achieving women. Those who struggle with it “maintain a strong belief that they are not intelligent; in fact, they are convinced that they have fooled anyone who thinks otherwise.”

Jean worked for a consulting firm for high functioning special needs families. She was successful at her job however, most of her adult life she felt undeserving of her success and as a result her self-confidence was affected. She worked hard to climb the ladder of success, earned several degrees, became a successful business owner and entrepreneur however, she felt like a fake. She was always afraid someone would find out she was a fake.

During a philanthropic event Jean met Lynn. They happened to connect instantaneously, Jean recalls, “it seemed as though we had so much in common even though we came from different worlds.” They stayed in contact with each other and eventually became great friends.

Jean decided to start a business with her good friend Lynn whom Jean revered because of her exceptional accomplishments as a writer, publicist, and highly acclaimed international speaker. Lynn suggested the two become professional business advisors. Although Jean was accomplished herself, she never acknowledged her success. She chalked up her accomplishments to pure luck.

Doubting Yourself In Your Professional Or Leadership Role

Accomplished leaders seem remarkably able and talented to the outside world. However, internally they secretly believe they are simply passing for competent. At the heart of IP, leaders are convinced that other people’s praise and recognition of their accomplishments are undeserved, chalking it up to external factors. Self-doubters believe that others are much smarter and more capable than they are, so any praise impostors earn makes no sense to them.

Jean continued to excel in her professional life, while she secretly laid awake at night as her fraudulent feelings of insecurity, knowledge, and skills kept manifesting. She worried she would be found out. As Jean and Lynn continued to establish their business in the early years, Jean never expected success to come so fast. The high standards she set for herself were important to her because she did not want to be seen as a fraud in the eyes of Lynn or any of their clients. Success made Jean feel relieved yet uneasy; relieved because of the accomplishments but uneasy because she felt she had not had enough time to truly master her new role as a professional business advisor.

The Struggle: Yes, I’m A Successful Leader – but I Feel Like A Fake

Leaders with IP will tell you they struggle their way through success, it’s like they bluff their way through life (ask a high achieving impostor, they will tell you it’s how they see it). They are haunted by the constant fear of exposure. With every success, they think, “I was lucky this time, fooling everyone, but how long will my luck hold out?

Leaders with Impostor Syndrome Become Masters at Explaining Away Their Success

Listen closely, you may hear some of these explanations.

I got lucky. They call their success luck or good timing, and dismiss it as others’ believing they were better, more intelligent, and more competent than they actually are.

I had a lot of help. According to V. Young, Ed.D. (2011), there is certainly nothing wrong with sharing credit. But to you, any form of support, collaboration, or cooperation automatically cancels out your own contribution.

Overpreparing and hard work. If you work hard enough and prepare enough (to the point of being obsessive), others will note that and not your shortcomings.

Procrastination. You tell yourself you work well under pressure however; you are really giving yourself an out when the just in time product isn’t as good as it could have been. Then, if you do succeed after procrastinating, you’ll just tell yourself that you fooled them again!

These are all coping mechanisms for the stress of dealing with Impostor Syndrome.

Hiding: In Jean’s Case She Hid Behind Lynn

Since Jean and Lynn experienced success right away, Jean felt unprepared, anxious, incompetent, and less confident in her abilities to hold up her end of the bargain. As a result, Jean began to hide (figuratively speaking) behind Lynn. Hiding made it much easier for Jean to cope with the fast success of the business; besides, she would rather give Lynn all the credit for their success and efforts.

After four successful years of Jean and Lynn working together, Lynn received a lucrative offer to work in Germany. As a result, Lynn ended her partnership with Jean. Jean saw this potential opportunity for Lynn a year earlier and was excited for Lynn but scared for herself because now the reality of being exposed as a fraud was more real than ever before.

Jean struggled for two years; business was still coming in but being a solopreneur was scary for Jean, she had no-one to fall back on and worse yet, she no longer had anyone to hide behind. Her stress level increased and the manifestations of being exposed as a fake amplified tenfold. She felt more incompetent and less confident than ever before.

Once Jean got past the two-year mark of being a solopreneur, she made some personal changes and began to focus more on personal growth and learning how to stop self-sabotaging her achievements. One day as she was preplanning and preparing for a workshop, she came across the term Impostor Syndrome and it piqued her interest. She became fascinated in the subject matter; she felt as though the author was writing about her life experiences.

The statistics were revealing: Impostor Syndrome is common – in a study of successful people by psychologist Gayle Matthews, 70% experienced IP at some point in their life. And while yes, early research from the psychologists’ work focused on high-achieving women, the syndrome has actually been found to impact men and women in roughly equal numbers.

Jean wanted to start changing her behavior. She started realizing her behaviors were 1) stressful and holding her back, 2) sucking her energy dry, and 3) not serving her purpose. She began to realize that her past behaviors did nothing to address her impostor feelings but rather served only to shield her from potential shame and humiliation.

How Do Leaders and Professionals Overcome Impostor Syndrome?

Leaders who experience IP, ask yourself this question: How long have you experienced IP? There are small actions you can take to start counteracting your current coping mechanisms. However, don’t expect an overnight recovery, it takes time and practice. Feelings are the last to change.

Valerie Young explains, “People who don’t feel like impostors are no more intelligent or capable than the rest of us. The only difference between them and us is that during that same situation that triggers an impostor feeling in us, they think different thoughts. This is really good news — because it means all we have to do is learn to think like a non-impostor” (2011).

Stephanie Hamilton of astrobites, says if you self-sabotage, start paying attention to what you’re doing and why. In concurring with Natassia Kwan, don’t deflect praise, embrace it! “Studies have shown that when receiving compliments, women or minorities will often deflect and say they “got lucky,” or even point to what they could have done better, instead of simply saying “thank you” or owning the praise.” Kwan writes that by owning your accomplishments you internalize your own abilities and strengths. The hardest part by far is getting started. Once you get started and start feeling good about yourself, you may want to keep going.

For the complete list visit, Dr. Valerie Young is an internationally recognized expert on Impostor Syndrome.

How Jean Began To Overcome The Impostor Syndrome

Jean decided it was time to think differently and work on her confidence and competence. Jean knew she had to look at her work as meaningful and fulfilling, and she did, she just forgot in the midst of IP. She recognized she wanted to feel more motivated and aware of how her work impacted her clients on a macro level.

Working on a macro level in her consulting business offers her the opportunity to make an impact on high-level issues that can lead to solutions at the personal and organizational levels. This helps Jean pinpoint specific pain points her clients are dealing with and want to find solutions. This reminder serves as a concrete motivator for Jean of why she works with high-level clients and boosts her confidence and competence.

She now keeps a success file of accomplishments, testimonials, and any other examples of her work. When she has a bad day like everyone does, and Jean has them occasionally, they are nothing like before; she opens her success folder and reminds herself of her accomplishments.

CONCLUSION: Putting It All Together

Leaders is your self-doubt on steroids? It is as if you have Impostor Syndrome. IP makes you feel fraudulent and worry you will be exposed as a fake. If you have IP you are not alone! Impostor Syndrome is debilitating but defeat-able. Some of the most capable and accomplished leaders may be suffering from a crippling phenomenon—an exaggeration that distorts their thinking making them believe they are truly incompetent, which affects their self-confidence. This distorted thinking convinces leaders they fake their way through their accomplishments.

Leaders with IP become masters at explaining away their successes. As you read in the story of Jean, an accomplished leader; she too struggled with IP. She hid behind her business partner, a true sign of Impostor Syndrome. In the end, Jean was able to overcome her fraudulent feelings of Impostor Syndrome and recognize she wanted to feel more motivated and aware of how her work impacted her clients.

All great leaders walk a fine line between self-doubt and staying humble. Are you looking for a leadership coach to bounce ideas back and forth about Impostor Syndrome, contact me.

Do you have any experience with Impostor Syndrome? We would love to hear your thoughts!

Hello, my name is Deb Olejownik, I am a certified leadership coach, nonprofit consultant, and MBTI®, certified practitioner. I help leaders, high performing individuals, teams and organizations get more out of themselves. I enjoy working alongside individuals, organizations and businesses through workshops, training, and staff development to overcome obstacles and increase effectiveness.

This site uses Akismet to reduce spam. Learn how your comment data is processed.

LEVEL UP YOUR LEADERSHIP WITH OCCASIONAL TIP'S & TOOLS!
INSPIRATION RIGHT TO YOUR INBOX!

WHY NOT GIVE IT A TRY?

Get your NO-FEE Clarity Session!

I AM HERE TO HELP

BURNED OUT OR STRESSED? 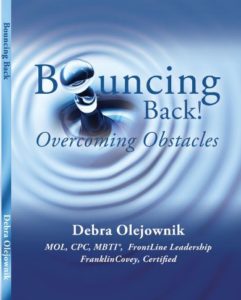 I reside in the Tulsa, Ok area, but willing and able to help anywhere!

Articles on Coaching and Leadership

Get It Now: Tips & Tools Newsletter